If you’ve read any of my previous articles in SkyWings, you’re probably well aware that one of my major areas of concern is checking line lengths. During the past month a number of matters have come up which underline the importance of ensuring our gliders remain in trim, for reasons of both performance and safety.

All gliders can go out of trim, often in a predictable way. Dyneema lines settle in over the first 25 to 50 hours of flying. Kevlar lines also shrink over time, although usually at a slower rate. All linesets can be seriously affected by damp or heat, and these changes can be less predictable.

The most common pattern we see is that the rear lines shrink by more than the heavily loaded front lines, increasing the angle of attack of the wing. Performance issues that follow can include a lower trim speed and reduced top speed, a tendency to hang back when launching, impaired glide angle and soggier handling. Safety can be affected too: the glider is that bit closer to stalling, going parachutal or spinning.

It used to be thought that stretching the shrunken lines would sort them out. But it’s now well recognised that stretching gives only short-lived benefits, as lines tend to revert to the same pre-stretched length fairly quickly. Within the last month we had a pilot come in to have his wing retrimmed, only a few months after having asked someone else to do the same job. They had measured the lines after first stretching them. The pilot reported that he’d seen an immediate improvement in performance after line stretching, particularly much crisper handling, but he felt he’d wasted his money on the first trim because the improvement had been quickly lost.

So if lines shrink, some more than others, and stretching them is not the answer, what is? Well, it is possible to replace lines, but that’s often unnecessary and more expensive than the alternative. Typically the best approach is to shorten the effective length of the relatively longer lines to match the shorter lines. That can be done by taking additional loops at the maillons, and occasionally further up the cascades if necessary. That’s what xc and acro competitors always do regularly, and have done for many years. But over the past few years many more club pilots have also come to recognise that both performance and safety can be restored very cost effectively in this way. 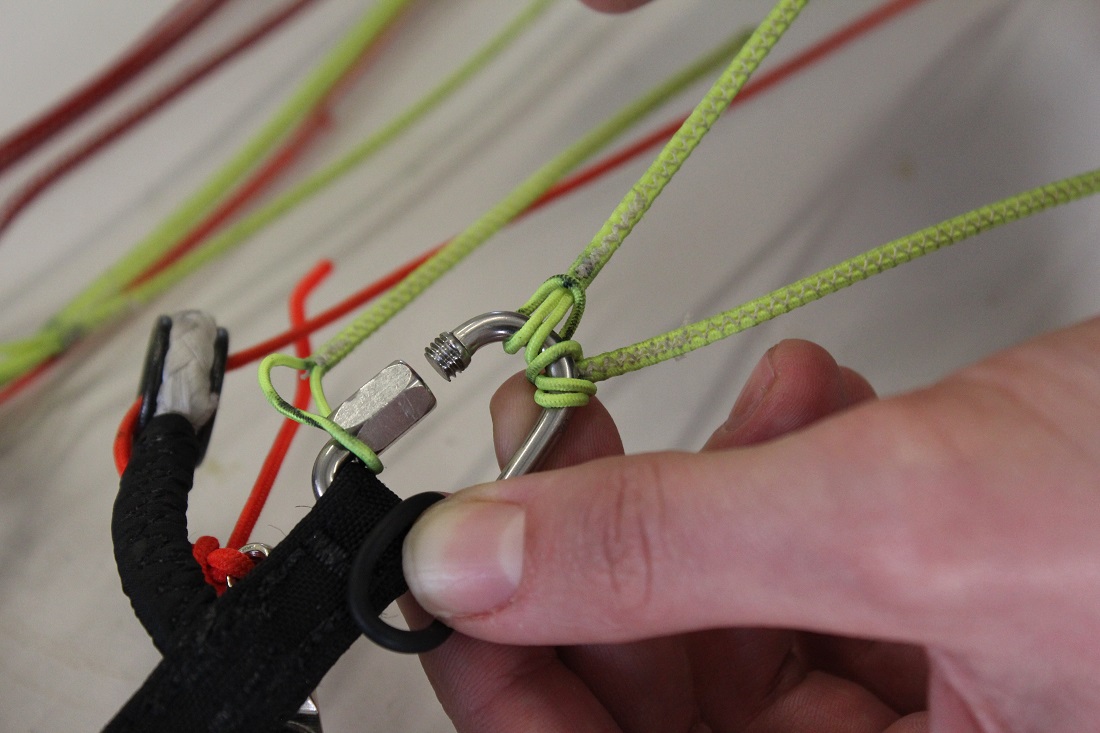 Sometimes the improvement can be quite subtle but occasionally the difference after trim can surprise the pilot. Recently we returned a glider which the pilot was very pleased to tell us now flew much better, but he felt that the brake position was now too high for comfort, making it difficult to take a wrap as was his habit. Over time his canopy had shrunk and gone out of trim, but the overall brake length had not been affected to anywhere near the same extent. As a result, his brakes needed shortening to restore the manufacturer’s specified relationship between brakes and canopy. We always try to ensure that our customers fully understand how their glider may feel differently after we make adjustments like this, but clearly on this occasion we didn’t get it right. That’s something we have already taken steps to improve.

Remember that changing the brake length from that specified by the manufacturer is not recommended. There has been a BHPA safety notice highlighting the dangers of shortening the brakes after two accidents where gliders went into deep stalls while towing.

Two fatal accident investigation reports were summarised on page 13 of January SkyWings. One involved a significant collapse close to the ground, followed by a rotation and deep stall, from which the pilot was unable to recover. Any report like this is very saddening to read. The article goes on to remind pilots of the dangers of line shrinkage and the need for regular checks. It’s worth realising that whilst being out of trim may not be the sole cause of a problem in flight, it may impair the passive safety of the wing, and its certified tendency to recover normal flight.

Towards the end of 2017 Supair issued a safety notice affecting a few of their EN B Leaf gliders. Pilots needed to check whether the serial number indicated it was one of those affected, and then request a kit of replacement A and C lines. Supair advised that instances had been observed of the glider going parachutal while pulling big ears in non-accelerated flight. Whilst the wing recovered as soon as the ears reopened, replacement lines were needed. We’ve had a couple of these gliders in the workshop recently to fit Supair’s replacement line kits, and we noted that the changes were relatively minor: the replacement A lines were 10mm shorter, and the new C lines were 10mm longer than the ones we took off. Clearly the differences from specified lengths do not have to be that great before glider safety can be affected.

Out in front: retrimming kept Theo Warden’s Enzo 3 competitive, both on climbing and glide, at the 2017 PWC Superfinal

Something to check when you’re next flying

It’s not just the glider suspension lines that can go out of trim. Clearly the brakes can be affected too, and not just in terms of their overall length. It’s not uncommon for us to see that the brake cascade no longer has the correct shape. A typical pattern is for the brake lines in the centre to shrink by more than those towards the tips. One effect of that can be to impair the glider’s turning performance, as the centre section of the wing will brake more than the tips.

It’s relatively easy to check in flight whether your brake fan has gone out of shape. When you’ve got plenty of clear air around you, look carefully as the trailing edge as you start to apply the brakes. It should be the case that all the individual brake lines start to operate at the same time. If you find that there are significant differences in the point at which they begin to take effect, it may well be worth getting them checked out and retrimmed if necessary.